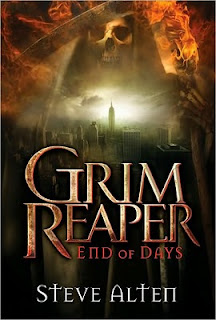 I started reading Steve Alten because of his exceptional storytelling and his edge-of-your-bed thrillers. This book eclipses pretty much everything he’s done thus far. Using a word like “epic” is so cliché but I really can’t think of another synonym to describe this book. Hell, even calling it a mere book seems insulting. When you read it you’ll understand. There are authors out there who are known for their impeccable research; Dan Brown, Eric Jerome Dickey, James Rollins, and Conn Iggulden. Welcome Steve Alten into that fraternity. But enough butt kissing and brown nosing… on to the book…

‘Grim Reaper’ is epic. (god, I hate when people say that). I get nervous reviewing books like this because it’s like asking a third grader to explain the law of gravitation as it relates to Mars. (Here goes…) I’m a sucker for end-of-the-word stories and writers who know how to tell a story. ‘Grim Reaper’ combines them both. This is a very *complicated* novel. Not complicated-hard but complicated-scope/detail. For starters Dante’s ‘Inferno’ is used as base for the story and we all know what a mind screw THAT book was. Good, yes but not something that I would read before bedtime. Scythe is a plague. But to call it just that would do injustice to the word plague. Scythe is a world clearing biological weapon of such malice, it would make Noah shiver. Of course it’s not 100% Earth-natural. Of course it has been manufactured by man. Of course you have governments that financed this and (yep) want to use this! Of course you have some lone nutcase who thinks is their duty to jumpstart Armageddon. Take all of that stick into the Steve Alten Mix-o-matic 2010 and you get this.

What really would happen if humanity was struck with an unstoppable plague? What if this plague was contained on an island? What if you could eradicate said island. Would you do it? What is an OK amount of people to kill (murder) in order to save six billion? Does God factor into this? Would he “stand by” and let man create his own Armageddon or step in to keep with scripture and wait for the appointed time to unleash his? OR… are they one in the same? The answers to those questions are not in this book, they’re inside you. They’re also inside the characters in this book. We get to observe the pain and unimaginable suffering they must witness (and in some cases, cause).

This will not be one of the best books you will read this year. This will be one of the best books you will read, period. Cliché? Perhaps. Laying it on thick? Not a chance. The longer I sit here and type the worse justice I feel I’m doing to this book because it’s magnificent on pretty much every scale and trying to convey that is daunting at best. For Steve Alten fans I don’t need to mention how flawless his writing and pace is. For those who don’t know, you do now. The development of the characters is a gem and you find that your emotions change with them. Your breathing matches theirs, your skin prickles with theirs, you dread the same fears, and you wonder if men can truly be this evil.

Steve also shows us a very unique side to the ‘Grim Reaper’. I’ve never seen… it… portrayed in such a way. The presence of the ‘Grim Reaper is the blood that gives life to this horrific end-of-times tale. Yeah I know…the Grim Reaper bringing life, Jason you’ve gone mad. Not mad, just in awe.

The only complaint that I have (and it’s personal): enough with the 9-11 conspiracy theories. It’s not that I mind them but they really seemed out of place in this book. The story would have flowed just as fine without them. It’s like going to Hooters and complaining about the type of socks the girls wore. In a book this narrative, this GRAND it came across as petty and needless. I read countless novels by authors that I disagree with politically but I read them because they are damn good authors. Steve is in the upper echelon of that, but this time I feel it took away from the story. And that is unfortunate. In spite of that I will put this book in my Top 20 best books read ever and also in that very, VERY rare category of “books that I’ll read again”.
Posted by Unknown at 11:12 PM